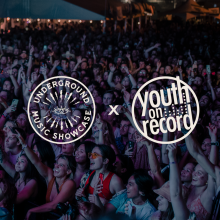 March 22, 2022 – Denver, CO – Under a new joint venture agreement, Youth on Record, a Denver-based nonprofit, has joined Two Parts, a Denver-based entertainment company, to lead the Underground Music Showcase (UMS), the largest, multi-day music festival in Denver. As co-owners, Two Parts and Youth on Record will focus the UMS on Artistic Excellence, Community Impact, and Economic Sustainability, with a commitment to advancing opportunities for historically marginalized artists.

"By partnering with an organization with such deep roots and the full faith of the community, we gain the firepower to mobilize the community in new ways," says Berry, who led Two Parts' purchase of the festival from the Denver Post Community Foundation in 2018. "There's so much Two Parts and Youth on Record can do to build on each partner's existing programming and relationships to support artists and build the next generation of performers to carry the torch."

Duffy sees the Two Parts/Youth on Record partnership as a model for how nonprofits and music festivals can co-create just and sustainable sources of support while driving impact.

“Everyone keeps talking about new ways of doing things, post-COVID. For Youth on Record, co-owning and co-leading the UMS is a new approach to fulfilling our mission, earning revenue, and reaching more artists and community members," says Duffy. "The work of the UMS is aligned with our mission, making it not only a smart investment, but one that can have a big impact."

Duffy and Berry are betting on a bold idea that music festivals with a mission will have more staying-power – and ultimately generate more revenue. They hope foundations, philanthropists, Colorado Creative Industries, the Scientific and Cultural Facilities Districts (SCFD), and government agencies will take note of this community-centered approach.

New mission-driven elements include increases in payments to performing artists (starting at $200 per artist and $400 per band) and deeper diversity among performers, sober bars and other resources for artists who struggle with substance misuse, opportunities to support young and emerging creatives, and an Impact Show focused on providing mental health support resources to attendees. Impact Days, a two-day professional development opportunity for UMS performers, will be hosted and produced by Youth on Record. Future plans include a deeper focus on accessibility, internship and workforce pipelines, and outreach to introduce more Denver residents to the UMS.

"Music festivals have the unique power to bring huge groups of people together. Nothing else does this: not concerts, not art exhibitions, not conferences, not plays," says Michael Bracy, a Youth on Record advisor and national music policy expert. "The UMS is an incredible opportunity to reach, activate, connect with, and serve a large number of people, which is central to Youth on Record's strategy for innovation and change."

This year's UMS will take place from Friday, July 29 to Sunday, July 31, drawing more than 10,000 music fans to Broadway/Baker neighborhoods. With performances by hundreds of bands composed of more than 600 artists, the festival will be true to its roots while integrating new energy and new community programs, says Berry.

"Attendees can expect the same spirit of discovery, community, creativity, and fun that has defined the UMS for two decades," he says. "The mile-long strip of South Broadway will once again transform into a bustling community gathering space for artists, creators, musicians, and fans who can look forward to everything they love about the UMS – and more."

The Two Parts/Youth on Record partnership began to take shape last August. Spurred by a $1M grant from philanthropist MacKenzie Scott in June 2021, Duffy approached Berry to propose that Youth on Record come in as an owner of the UMS; the nonprofit served as the festival's charitable beneficiary for many years.

"We had the idea that if you center impact and introduce philanthropy to a music festival, you can create something really powerful," says Duffy, who brought the idea of buying into the UMS to the Youth on Record board soon after meeting Berry. "The pandemic made it clear that bold moves are necessary to drive change in our world. Youth on Record has always had a spirit of innovation and taking risks, so we were up for the challenge.”

Unlike most traditional music festivals, which measure success by financial performance alone (which struggle to make it, and often don't), the UMS will measure along a triple-impact bottom line of Artistic Excellence, Community Impact, and Economic Sustainability. Duffy and Berry intend to raise $200,000 from donations, foundation grants, and other philanthropic sources to cover increases in programming expenses not covered by ticket sales, corporate sponsorships, merchandise, and concessions.

“Youth on Record staff, board members, and volunteers used to sling beer at the festival; now the organization is a co-owner, which gives us a real seat at the table,” says Duffy, noting that the venture was unanimously approved by Youth on Record's Board of Directors. “It’s a risk, like any business opportunity. But it’s one worth taking.”

“With our powers combined, Two Parts and Youth on Record are excited to push the festival into new, interesting, and community-focused directions,” says Berry. “UMS has always been Denver’s festival, and we can’t wait to continue building it for our city.”

The UMS was founded by Denver Post journalists John Moore and Ricardo Baca in 2001.

Tickets to the UMS are on sale now. A portion of all sales will benefit Youth on Record.

Two Parts is an experiential + creative agency dedicated to connecting people, places, and stories to create unforgettable experiences. Led by entrepreneur Casey Berry, Two Parts collaborates with ambitious, fun-centric brands to an audience eager to get off their couch and experience the unexpected, bringing people together and making unforgettable memories along the way. After buying the UMS in 2018, Two Parts increased performance opportunities and payments to performing artists and financial contributions to nonprofit partners, demonstrated a commitment to diversity among performers, and adapted to pandemic challenges to deliver a virtual festival and fundraiser that raised over $75,000 for the Colorado Music Relief Fund in 2020, as well as a sold-out, in person festival with strict safety protocols in 2021. Read Founder Casey Berry's bio here.

About Youth on Record

Youth on Record is known for operating outside of the traditional nonprofit model through entrepreneurship and cross-sector partnerships. In 2015, the organization opened a 4,000-square foot recording studio for youth in Denver Housing Authority's Mariposa housing development in Denver's La Alma/Lincoln Park neighborhood. Youth on Record received the 2020 Business in the Arts Leadership Award from the Colorado Business Committee for the Arts. Youth on Record (YOR) empowers Colorado’s underserved youth to achieve their academic, artistic, and personal best by employing local, professional artists as their educators. As Colorado's leading provider of music education programs for youth. YOR is committed to ensuring that 3,000 teens in some of Denver/Aurora's most vulnerable communities graduate from high school and are ready to enter the workforce and transition to college or enter advanced technical training and careers. Their programs empower young people to make life choices that positively impact their future by teaching them to develop coping tools, inspiration, and wherewithal to succeed in today’s world and to become leaders of tomorrow. Read Executive Director Jami Duffy's bio here.