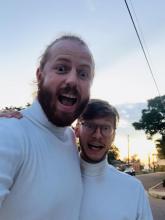 For Release On September 8

[Denver, CO] September 8, 2020 - After 20 hours of straight DJing, there are few things that make you want to continue. One is the morning coffee folks logging into Twitch to cheer their support. The other is finding out that you’ve raised $11,640 to donate to local charities.

Retrofette’s Nuit Blanche presented by Tito’s Handmade Vodka was a live streamed marathon 24 hour DJ set with all proceeds donated to local nonprofit Youth on Record. Organized by Denver synthpop group Retrofette and Multi-Platinum Music Ambassador for YOR, the event was a large success surpassing all their fundraising goals and proving the strength of local music communities even in the time of live streamed concerts and coronavirus mayhem.

All proceeds were donated to local nonprofit Youth on Record and their mission of providing music education services to underserved Colorado youth. The raised funds will support new costs associated with coronavirus and aid in their commitment to making all of their programs 100% cost free for their students.

“We were humbled by the community’s response to the event, and so thankful to be able to make a contribution to such an important mission in Colorado,” said Retrofette frontman Sean Culliton. “We’re very proud of the music community that we’re a part of here in Denver.”

The link to donate to Youth on Record is still open here. After a couple good night’s sleep, Retrofette became excited about making Nuit Blanche an annual event, and look forward to releasing their first full length album in early 2021.

“With something for everyone, Retrofette makes music that will make you want to bust out the tracksuit, dust off the Delorean, and dance.” –Bandwagon Magazine

Denver-based Retrofette is the byproduct of keyboardists Sean Culliton and Xavier Provencher's love for vintage synthesizers and sweaty dance floors. Joined by synth bassist Ben Weirich and drummer Dylan Johnson on stage, the quartet’s brand of 80s tinged synthpop was born in March 2016 and has since garnered a steadfast following.

In June 2018 Retrofette released its latest single, Lover in Japan, a summery dance anthem that inspired by classic 80s new wave. Retrofette has shared the stage with acts such as Flight Facilities, The Faint, Juan Maclean, and Crooked Colours. They have played on the legendary Red Rocks stage, sold out audiences at Denver’s Hi Dive, Larimer Lounge, and Ophelia’s, and were selected as the Best Pop Act of 2017 in Colorado by Westword Magazine.