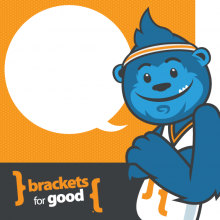 Brackets for Good and Youth on Record Team Up!

Youth on Record has been selected from more than 2128 charitable organizations across the country to compete in Brackets For Good 2018. Starting Friday, March 9, Youth on Record will rally supporters to advance in an online single-elimination bracket-style fundraising tournament with a grand prize of $10,000.

Indianapolis-based Brackets For Good pairs with corporate and nonprofit sponsors to host online bracket-style fundraising tournaments in philanthropic communities around the United States. Brackets for Good has raised more than $6.4 million for charitable nonprofits since its 2012 kick-off contest in Indianapolis.

Participating nonprofits rally enthusiastic donors to out-fundraise their opponents in order to advance. Through the excitement, localized marketing and corporate involvement, nonprofits earn increased exposure, gain access to free fundraising tools, and are introduced to new donors. Dollars from donors translate to points, giving participants the opportunity to advance in each markets’ bracket. Competing nonprofits keep donations received during tournament play, no matter how many rounds they advance. The winning organization in each tournament receives an additional championship grant.

To get in the game and help Youth on Record win Brackets For Good Denver 2018, visit https://denver.bfg.org/matchup/youth-on-record and score points by making donations!

About Brackets For Good
Brackets For Good uses the power of sport, innovative technology, and online fundraising tournaments to inspire people to learn about and rally behind charitable nonprofits that make our world a better place. Brackets For Good is a program of 501(c)3 charitable organization, Joined For Good. Since the inaugural tournament in 2012, new awareness, an average of over 30% first-time donors, and over $6.4 Million dollars has been generated for hundreds of charitable organizations across the country. It’s Competitive Giving. Everybody Wins. For more information, visit BFG.org.