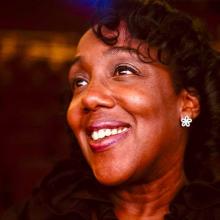 Youth on Record is excited to announce the hiring of Deputy Director, Stephanie Tavares-Rance. Over the course of her 30 year career, Tavares-Rance has held various executive marketing positions at fortune 500 companies. In 2002, she established the creative outlet, RUN AND SHOOT FILMWORKS, INC., with her husband Floyd A.B.Rance III. Now, her Academy© accredited Run&Shoot Filmworks, Martha's Vineyard AA film festival is one of the fastest growing film festivals in the country. Recognized for their impeccable selection of films, premiere screenings, and welcoming environment, Floyd and Stephanie have made a lasting mark in the entertainment industry.

“When Stephanie applied for this position, I was in awe,” Jami Duffy said. “She was already someone who had gained my trust and respect–and the trust and respect of our community–by walking her talk. She believes in access to the arts for all youth, no matter what. Justice and inclusion are her core values. She’s an entrepreneur, a bold visionary and an incredible person. One of the most affirming moments in my career at YOR was when Stephanie accepted the job. I thought to myself, ‘If we can attract this kind of talent, we must be doing something right.’”

In addition to the film festival on Martha's Vineyard and their new festival in Denver. CO called The Color Of Conversation Film Series, Stephanie, and Floyd have also proceeded to produce outstanding visual work for several clients including Family Dollar, HBO, Martell Cognac, Reebok (Allen Iverson and NY Giants) and Footlocker.

“I am excited to join Youth on Record as their new Deputy Director,” Tavares-Rance said. “During this high growth period, I look forward to scaling the company’s innovative systems, expanding the team and advancing our core operational excellence.”

Stephanie is also on the board of Sweet Blackberry- actor Karyn Parsons’ organization that tells black stories via films, IWF, The Denver Art Museum (marketing alliance) and The Commission on Cultural Affairs for the Mayor’s office in Denver, CO. Stephanie is a featured speaker at Georgetown University - she speaks with marketing students about the impact of social media and starting your own business.

Stephanie has won numerous awards in digital marketing and was most recently awarded a Black Woman in Media award for her work with the film festival and supporting the works of people of color. In 2022, Stephanie and her husband  were awarded the 2022 J.E.D.I award from the Denver Mayor’s office (justice, equity, diversity and inclusion).

“One of the things I’m most excited about is to share leadership with Stephanie. I trust her. I’ve got her back. She’s strong, smart, compassionate – and she can be fierce (one of my favorite qualities in women leaders). As a woman who has led this organization for over the decade, I welcome another woman to the Executive table – to grow with, to learn from, and to support as she shines her bright light.”