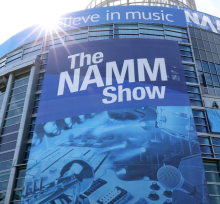 We're proud to share that Youth on Record Audio Arts Innovator Jelie Jones was invited to speak at the National Association of Music Merchants (NAMM) Show 2022 this past June. She was a panelist in a session called, "What's It Like Out There? Insights From Recent Music Program Graduates." She shares her experience and insight from The NAMM Show 2022 below:

Coming from NAMM 2021 being virtual I had no idea what it would actually be like. Online there were a plethora of hour long educational sessions to attend and a time based chat box to talk to other viewers. Once the session ended, anything put in the chat most likely wouldn’t get a response. It was like watching comments when a celebrity goes live.

So, when I walked into the Anaheim convention center in California, I knew it would be a significant step up from our worldwide zoom fatigued experience.

There were hundreds of booths containing hundreds of employees in the music technology industry. They were showing off new instruments, new software, new hardware and even other music related mechanisms like physical metronomes. I zig zagged from booth to booth looking for companies that I was familiar with to see what new devices they were working on.

Companies like Izotope, Native Instruments, Polyverse and so on flooded the soundscape with cutting edge synths and sound effects. Vehicles hosting newly introduced surround sound systems were scattered about and music YouTube influencers and celebrity engineers like Mixed By Ali walked around casually.

There were a ton of performances that were exclusive to specific booths. For example, there was a rumor that Kendrick Lamar was coming to Mixed By Ali’s Seeing Sounds booth. Of course, that never happened, but Laura Escuede, Kanye West’s stage manager, showed up to perform at Orba’s booth.

On Friday night, there was a secret after party hosted by Antares, the company that invented Autotune.

On Saturday night, there was a secret after party hosted by Splice, the number one company in royalty free samples.

I also saw a lot of my own YouTube subscribers in person for the first time.

NAMM 2022 was a great experience full of information, technology and people to connect with.